Dohner Memorials, Inc., located at 100 Park Avenue in Sinking Spring, PA is a full-service headstone company. Established in 1898, Dohner is now owned by Kuhn Funeral Home in West Reading, and is managed by Dohner’s longtime headstone expert, Keith A. Conrad.

Please view our introductory video and explore our website for more information, or contact us at 610-678-4530 or michaelkuhn@kuhnfuneralhomes.com to learn more. 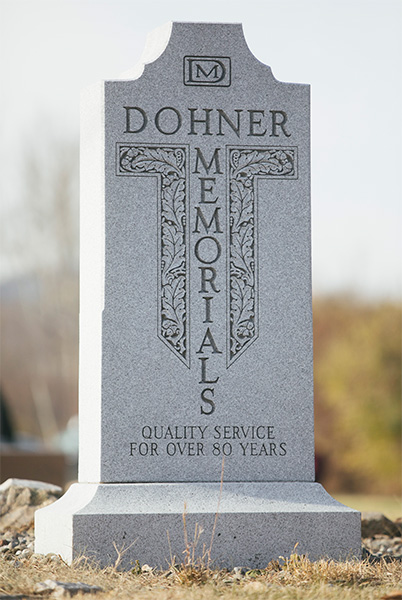 The Kuhn family is honored to carry on the tradition of memorialization begun by brothers John and George Dohner in 1898 and continued to operate under John’s children, John Dohner, Jr. and Edith Dohner. Notably, John Jr. fought for our country during World War II in the European theatre and during that time Edith Dohner operated the memorial company on her own, during a time when women rarely took on such a role.

In 1981, Dohner was purchased by Clair and Sandra Graffius. For a number of years, Sandra — like Edith before her — served as the primary operator of Dohner after the passing of her husband, Clair, who passed just days after the purchase of Dohner. Sandra was joined by her daughter, Kelly Graffius, in 1985 shortly after Kelly’s graduation from Shippensburg University. Kelly’s husband, Peter Pellicano, joined the family business in 1990. Upon Sandra’s entrance into politics as the County of Berks Controller in 2007, Kelly and Peter served as the primary operators before selling the business to the Kuhn family in May of 2019.

Keith A. Conrad is the manager at Dohner Memorials today. Keith is a 25-year veteran of the headstone business including 19 years working at Dohner with Sandy Graffius and later Kelly and Peter Pellicano. Keith’s experience, hard work and attention to detail ensure you and your family that the headstone selected at Dohner will be exactly the perfect memorial for your loved one.